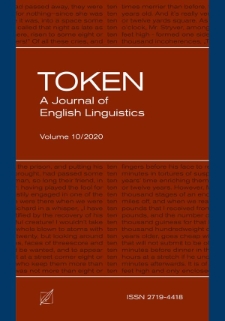 The textual material included in the Salamanca Corpus bears witness to dialectal awareness in 19th-century Derbyshire, with an important number of literary texts that reflect the local people’s habits of speech. Despite the fact that this variety ought to be of particular interest since it was used in an area which marks the transition between the North of England and the West Midlands, and the East and West Midlands, literary representations of the Derbyshire dialect remain largely unexplored (García-Bermejo Giner 1991, 1993 is the most remarkable exception). According to research in the field, the analysis of this type of representation is crucial to investigate the processes of enregisterment of dialect varieties, as Johnstone et al. (2006) and Johnstone (2009, 2013) have shown. They examine the enregisterment of Pittsburghese by looking at non-standard discourse in a range of modern sources. Less attention, however, has been paid to the study of this process in historical contexts, the works by Beal (2009, 2017, 2019), Ruano-García (2012, 2020, forthcoming), Clark (2013), Cooper (2013, 2016, 2020), and Beal – Cooper (2015) being among the exceptions. This study takes a preliminary approach to the enregisterment of 19th-century Derbyshire dialect by examining a selection of instances of dialect writing, most of which are included in the Salamanca Corpus. I aim at identifying the main linguistic forms associated with this variety in terms of spelling, morphology and lexis, as well as determining the extent to which 19th-century instances of dialect writing contribute to the enregisterment and dissemination of such linguistic forms and the values they index.